Two Swansea-based organisations have joined forces to save a classic set of 12 modernist church windows and relocate them to a church in Mold, Flintshire. 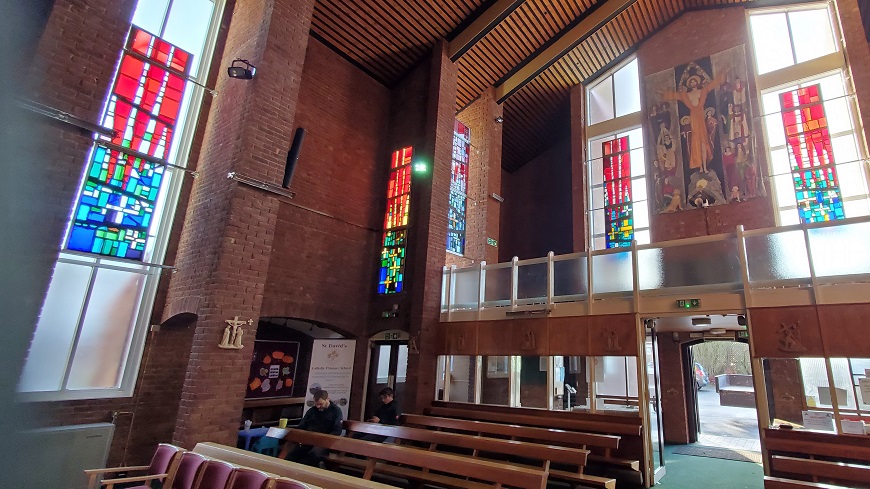 The windows were created in 1968 by Jonah Jones, who was a leading figure on the Welsh arts scene in the second half of the 20th century. Best known for his sculpture and watercolours, Jones was also part of a group of pioneering artists in Europe in the 1960s using the new technique of dalle de verre – slab glass supported in a concrete or resin matrix – who learned as they worked, creating daringly innovative work in the process.

For over 40 years the 12 windows dominated a Catholic church in the village of Morfa Nefyn on the north coast of the Llŷn Peninsula, where they stood floor to ceiling on all sides of the church, creating a vivid abstract surrounding of brilliant primary colours. But in 2016 the church was closed due to falling congregation numbers. It remained empty until it was demolished in 2019, by which time the windows had fallen into partial disrepair and had suffered some damage from vandalism.

The Catholic Diocese of Wrexham thought Jones’s windows should be given a new lease of life if they could be moved. In 2018 they approached Scene & Word, a Mumbles-based non-profit volunteer-run company set up to promote Jones’s work and his values as an artist and educationalist after he died in 2004, for professional advice.

The conservation expert Alun Adams, who was one of Scene & Word’s directors, was working as coordinator of the Architectural Glass Centre (AGC) at Swansea College of Art, part of the University of Wales Trinity Saint David (UWTSD). Adams visited Morfa Nefyn to inspect the condition of the windows and assess whether they could be moved safely and transported elsewhere for repair and relocation. He reported back to the Diocese that it was feasible, and later introduced his fellow directors to Owen Luetchford and Stacey Poultney, glass technicians at the AGC.

The Diocese chose St David’s Church, Mold, to receive the windows. They contracted Scene & Word to work with the AGC to remove the windows from Morfa Nefyn in early 2019 and transport them initially to Swansea.

An additional contract from the Diocese followed to repair and refurbish the windows. Work on them started at the AGC in 2020 but was suspended due the pandemic. It was eventually completed in late summer 2022 when the final panel was delivered to Mold.

“There’s a brutally elemental quality to dalle de verre as a medium,” said Luetchford, “from the inch-thick slabs of glass to the sheer size and weight of the concrete or resin matrixes they’re set into. Despite this, the process of restoration requires a sensitivity to the limitations of the materials and the most suitable methods for their preservation. Restoring a dalle scheme of this size presented a unique set of logistical and technical challenges and we learned a great deal resolving them.”

Poultney added: “The resin matrixes were in relatively good condition with some broken joints requiring repair. We were able to replace most of the missing and severely damaged glass dalles from the school’s extensive glass stock, and we fused blocks of coloured glasses to replace colours that couldn’t be sourced elsewhere. Our in-house waterjet cutting facilities allowed us to precision cut the replacement dalles to fit exactly into their cast resin openings.

“One panel had completely failed due to structural issues. We had taken rubbings of each panel prior to their removal, recording the position of all the glass elements. This allowed us to rebuild the broken panel as an almost exact copy of the original. Researching traditional dalle de verre techniques provided a fascinating insight into the structural issues of the medium and we adapted our approach to build the most robust and faithful copy possible.”

Luetchford again: “The panels’ unusual combination of materials and bold use of colour and form generated a lot of interest amongst our students. We involved some of our masters’ students in elements of the restoration process, while others were inspired to experiment with the format in their own work, using new combinations of materials to achieve striking results.”

Dalle de verre windows are inherently heavy. Each of the windows by Jonah Jones comprised two panels. It took two people just to lift and move one panel at ground level and special equipment to lift it into position to be installed. Framing, supporting and installing them in Mold presented a unique engineering challenge. 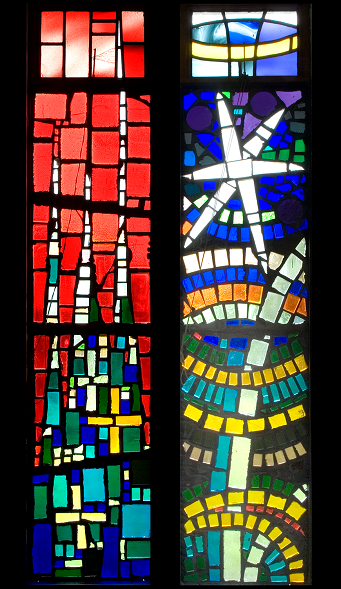 The newly completed installation there has been directed by a St David’s Church parishioner, Mike Bunting, a chartered mechanical engineer who has worked extensively on building and maintaining power stations in England and Wales. The windows have been divided into two groups. Superimposed on larger clear-glass windows, eight have been hung in purpose-made stainless-steel frames designed by Bunting and constructed by Dee Tech Services, a Deeside engineering company. The other four windows have been housed and backlit in specially made lightboxes hung on internal walls on either side of the church altar.

Mike Bunting discovered he had something in common with Jonah Jones, whose army unit was posted to Palestine in 1945. “I spent several years working in Israel, although Jonah would have known it as Palestine when he was there. From this experience I can sense the colours of the rocks, houses and water of the Holy Land in the ‘hero windows’ on either side of the main altar, even to the palm trees gently swaying in the breeze!”

Swansea’s Glynn Vivian Art Gallery has small sculptures by Jonah Jones in its collection which occasionally are brought out and shown. A large slate plaque designed and cut by Jones, commemorating the opening of the Taliesin Arts Centre in 1984 on Swansea University’s Singleton Campus, hangs in the bar outside the arts centre box office.