UWTSD is proud to report that Dr Nicholas Campion, programme director of the University’s Master’s programme in Cultural Astronomy and Astrology has been honoured with the Carlos Jaschek Award, the leading international award in cultural astronomy. 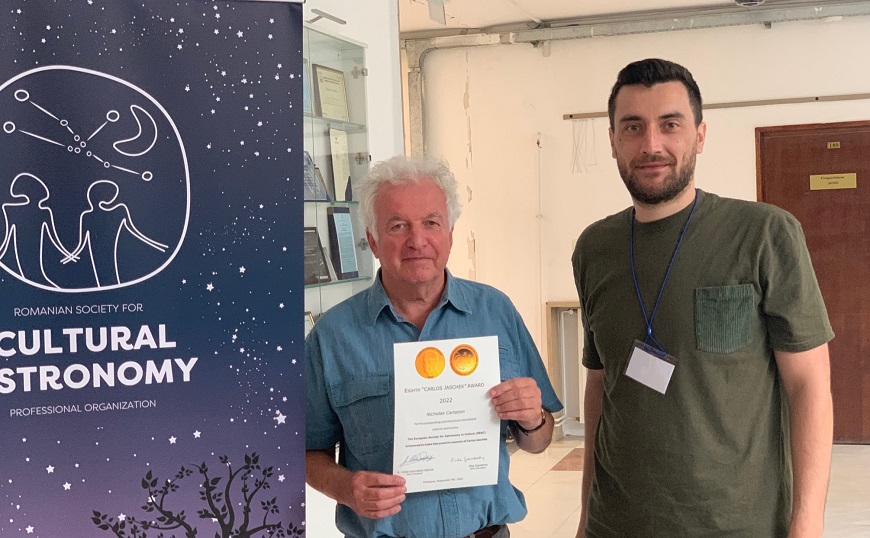 The award is presented biannually by the European Society for Astronomy in Culture to recognise outstanding contributions to the study of the relationship of astronomy and culture worldwide. This year, the award was presented during the Society’s conference at Timosoara, Romania and represents a substantial recognition of Dr Campion’s work in making UWTSD a leader in the field.

On receiving the award, Dr Campion, who is also the Director of the Harmony Institute at UWTSD, said:

“I’m delighted to receive this award and I’d like to thank the European Society for Astronomy in Culture for this wonderful honour.

When you look at the individuals who have won this award previously it really is a great privilege to have my work recognised in this way.  I feel that my work represents one of UWTSD’s great strengths – its role as an innovator and as a leader in opening up new academic disciplines.”

Cultural Astronomy focuses on all the ways in which astronomy impacts on human culture from religion to science, and from politics to the arts. Dr Campion’s own writing is notable for its huge sweep from ancient Babylonian divination from the stars, through to politics and astronomy since the sixteenth century and the ethics of modern space exploration. He is well-known for his two-volume History of Western Astrology, the definitive work on the subject. He is also on the International Executive Committee of the conferences on the Inspiration of Astronomical Phenomena.

Following the announcement, Dr Campion has received praise from a number of leading figures in the field.  Dr Fabio Silva, Senior Lecturer in Archaeological Modelling at Bournemouth University and co-founder and co-editor of the Journal of Skyscape Archaeology, and a previous winner of the award, said:

“This award is a fitting tribute to Dr Campion’s body of scholarship and research through which he has explored the role of astronomy across culture – in religion, politics, philosophy, the arts and the built environment. Through his directorship of the MA in Cultural Astronomy and Astrology since 2004 (since 2007 at the University of Wales Trinity Saint David) he has taught a generation of students the importance of the sky in both ancient and modern culture.”

“Dr Campion has provided an encouraging model for others, and this recognition will help spotlight the thoughtfulness and active participation he has brought to our studies.”

J. McKim Malville, Professor Emeritus and former Chair of Astrogeophysics in the  Department of Astrophysical and Planetary Sciences at the University of Colorado, also a previous award winner, added:

“Dr Campion’s work in demonstrating how so many aspects of human culture are linked to our ideas about astronomy, through his teaching and research, has opened our eyes to the complexity and richness of our engagement with the heavens.”

The award was established to commemorate the outstanding contributions of Carlos Jaschek who died April 1999, an emeritus professor of the University of Strasbourg, director of the Strasbourg Observatory and creator of the information centre for stellardata. He was a well-known astrophysicist who worked mainly with stellar physics and thetaxonomy of stellar spectra.