Students from the BA Acting, BA Applied Drama and BA Dance courses from The University of Wales Trinity Saint David (UWTSD) are looking forward to their end of year productions held at the Carmarthen Campus. 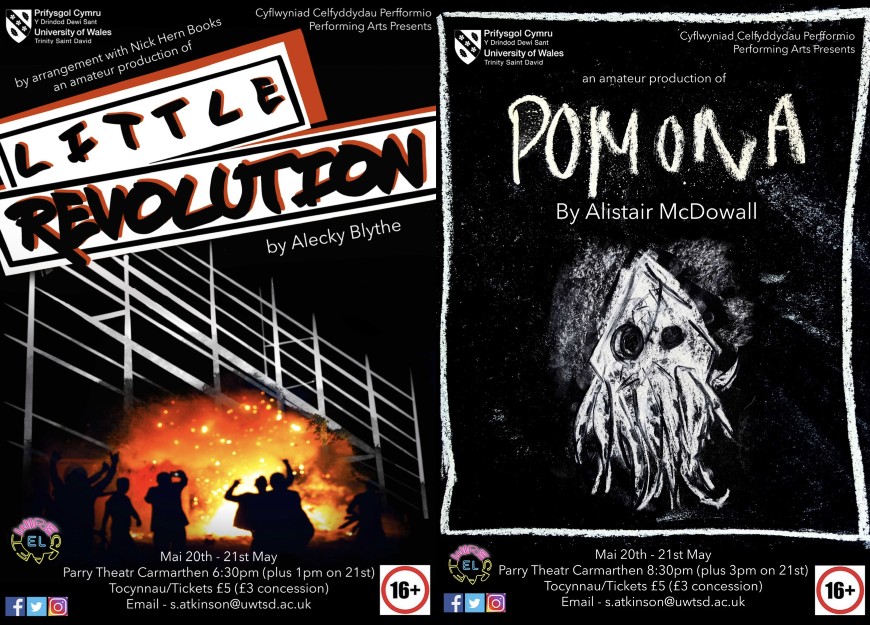 Performances will be held at various locations around the Carmarthen campus on the 19th - 21st of May, and every student will be taking part from each year. It will be a chance to celebrate the creative practice that students have developed during their time as students at the university.

"The students have generally responded with enthusiasm and curiosity to the new challenge of exploring Physical Theatre. They have been very open to working in an unfamiliar style for them with a positive attitude of interest.”

This performance will take place outdoors, outside the library.

Also, third year BA Dance students will be performing Homebody mentored by Zosia Dowmunt at the Stiwdio Fach in Yr Egin. Zosia described the performance as

“A cast of women explore the body as home, the body at home, and the body in the home. Exorcise the listless languishing demons of lockdown, draw solace from the body, celebrate the hitherto ‘female’ domain being thrown open, lament the loss of opportunity as promised blank slate is besmirched by ‘back to normal’, and condemn the ludicrous state of things.”

First year BA Acting and BA Applied Drama will be performing ‘It’s never bleak in Burnwood’ at the Haliwell Theatre. In preparation for this performance, students have been exploring character and world building through improvisation. They’ve been working together to create the town of Burnwood and the character who live there and collaborated together on a narrative that weaves their stories together and explores both the light and dark of this particular

Third year BA Acting students will be performing ‘Pomona’ by Alistair McDowall in Parry Theatre. This studio module offers the actors the opportunity to surrender themselves to a physically and emotionally demanding rehearsal process.

“The students have challenged what they thought themselves capable of. They have created a powerful piece of theatre. It is my hope that ‘POMONA’ will be a fierce celebration of their time at UWTSD, and a launchpad into their creative careers."

“This is a busy week of assessments for all three year groups and it's a wonderful time of the year where we celebrate the students' practical development across many areas of performance. It is a great opportunity to see the students' hard work in action and also gives each year group the chance to see what their peers have been up to.

“After two years of restrictions in terms of in-person performances and physical distancing, we are delighted to see performances in person and on campus!”

All productions will be performed at various locations around the Carmarthen campus. Tickets are available from Stacey-Jo Atkinson s.atkinson@uwtsd.ac.uk