UWTSD students collaborate together on a multi campus end of year production.

Creative students from The University of Wales Trinity Saint David will be collaborating together on a multi campus end of year production. 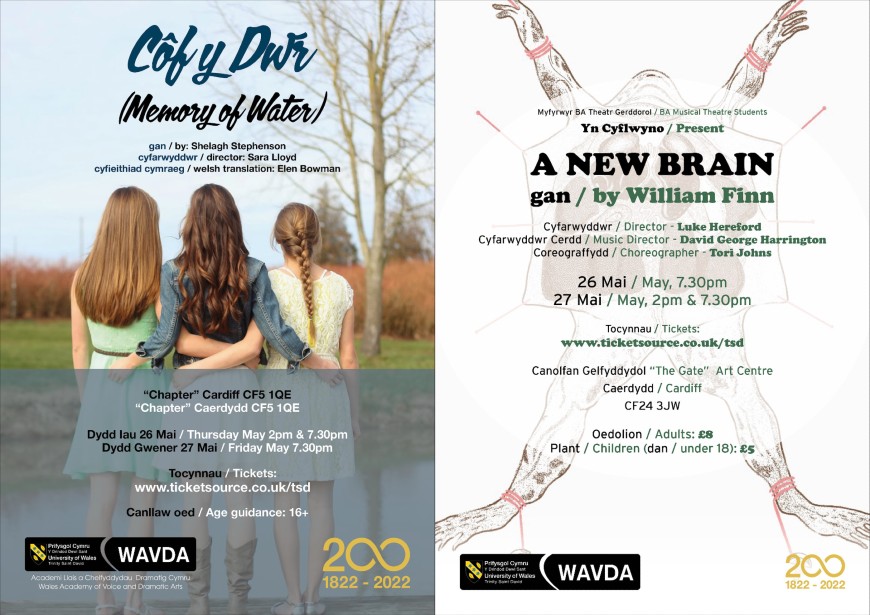 For the first time, students from the BA Set & Design production course on the Carmarthen campus will be designing the sets, costumes and props for the end of year performances held by the BA Perfformio & BA Musical Theatre students based in Cardiff.

The Set & Design Production Students have been working alongside the directors, production team and performing arts students, as well as being supported by UWTSD Carmarthen staff and students.

“Having the opportunity to not only work with one, but two professional directors in our second year of university is incredibly eye-opening, in all the best ways possible. Putting all the things we have learned so far into practice, shows the great support we’ve received from our lectures as well as the importance of teamwork and networking from an early stage.”

"Collaborating with professional directors has been an amazing opportunity within my second year. With the support from our lecturer and production staff, this opportunity has allowed me to further develop my skills as a designer"

“This has been a brilliant opportunity for our students to be involved in and has allowed them to put their skills into practice. Collaboration is key across the creative industries and being able to link up our practice across the two campuses replicates an industry working environment for our students. This encourages teamwork and professional networking as well as developing an understanding of creativity and innovation.”

‘Côf y Dŵr’ is the production that the BA Perfformio students will be performing on May 26th and 27th at the Chapter Centre in Cardiff. It’s a translation of Shelagh Stephenson’s ‘The Memory of Water’ by Elen Bowman.

This is a drama about three estranged sisters who meet on the eve of their mother’s funeral to argue and misremember in Shelagh Stephenson’s examination of the structures of memory and family. As they attempt to organise her funeral, their memories of their childhood run together and the secrets of their separate lives are revealed. Theresa, the owner of an alternative therapy business, is angry that she was left to care for their dying mother. Mary, a doctor, is still struggling with a deep loss from her past. Catherine seeks attention through a succession of short-term partners. Memories fade, blur and persist as the sisters bicker, watched over by the ghost of the mother to whom they are preparing to say goodbye.

This performance will be directed by the experienced director from Theatr Genedlaethol Cymru, Sara Lloyd.

The BA Musical Theatre students will also be performing on May 26th and 27th in their production of the well-known musical ‘A New Brain’ by William Finn at the Gate Arts Centre in Cardiff.

This musical follows Gordon Michael Schwinn’s story. He is diagnosed with a brain tumour, and forced to either come face to face with his creative ambitions, or sacrifice himself to his very own quarter-life crisis, and the lovable screw-ups in his life: an overbearing mother, and imperturbable boyfriend, a power-belting homeless woman, and a tyrannical Kid’s TV show host. Inspired by composer William Finn’s own personal experiences, ‘A New Brain’ is a satirical, life-affirming medical tragedy, about facing our innermost anxieties, personal traumas and hallucinogenic fever dreams – all those things that come with making great art.

Luke Hereford is the director of ‘A New Brain’,  who recently directed the successful production of ‘My Grandmothers’ Closet’ performed at the Wales Millennium Centre recently.  The musical has been choreographed by one of UWTSD’s BA Commercial Dance tutors Tori Johns, who has also performed in the West End in popular musicals such as ‘Cats’ and ‘Phantom of the Opera.’ David George Harrington is the music director for this production.

“This collaboration is important within the University’s development, and it’s an important element within the creative industry. Most jobs within this industry rely on freelancers that aren’t location-specific, therefore an opportunity like this to work with others prepares students for work after graduation.”

Tickets for both performances are available from here