The Academy Voices from the Wales Academy of Voice & Dramatic Arts at The University of Wales Trinity Saint David will be representing Wales at Royal Windsor Horse Show this week as part of the Platinum Jubilee Celebration, A Gallop Through History. 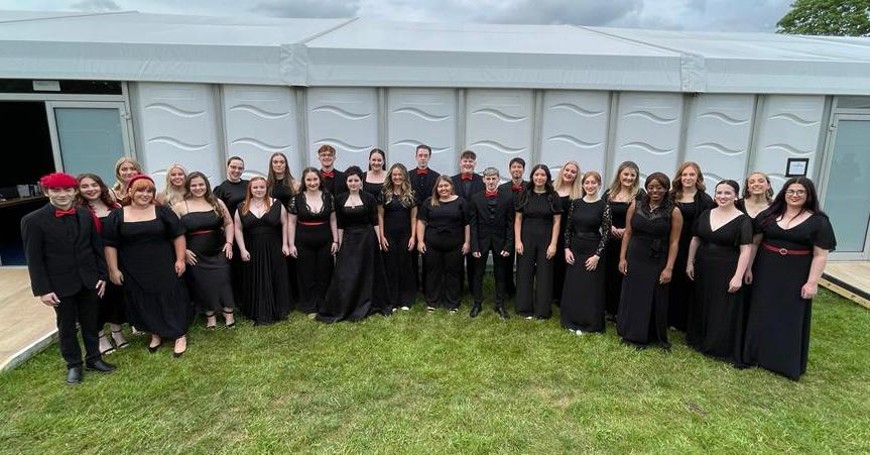 The choir, formed by Senior Lecturer Eilir Owen Griffiths, will be performing at Windsor Castle, where thirty students will be sharing the stage with the mezzo-soprano Katherine Jenkins singing Daniel James’s famous Welsh hymn ‘Calon Lân.’ Performed live to an audience of over 5,000 each of the four nights, the event will also be broadcast to the nation on Sunday 15 May by ITV. The show includes over 500 horses and 1,000 including famous actors and artists, musicians, international military displays from the Commonwealth and Europe, the Armed Forces, dancers and global equestrian displays.

The choir take part in a special medley written by award winning “Wolf Hall” composer Debbie Wiseman and sharing the stage with Emerald storm, dancers from Northern- Ireland, and The Edinburgh Tattoo Dance Troop dancers from Scotland and accompanied by the Tri-Service Orchestra and members of The National Symphony orchestra from England.

Taking part in an international event like this for students is an excellent opportunity to represent Wales.

“ This is a fantastic experience for students, and a golden opportunity for them to take part in an event of such national importance  that celebrates the Queen’s Platinum Jubilee.”

Students will be performing at Windsor Castle from the 12th until the 15th of May.