Some examples of our research

Associate Professor Ross Head leads a team of product design engineers in the University’s Cerebra Innovation Centre (CIC) and responds to requests from families to investigate and develop interventions to support independent living and to improve life quality.

The main focus here is on increasing social inclusion by utilising intelligent user-centred design. The products, once designed and manufactured, are given free to families at their point of need.  Where there is proven market demand, CIC also works with partner companies to commercialize products.

Collaboration with Firefly by Lecky: Goto and Scooot 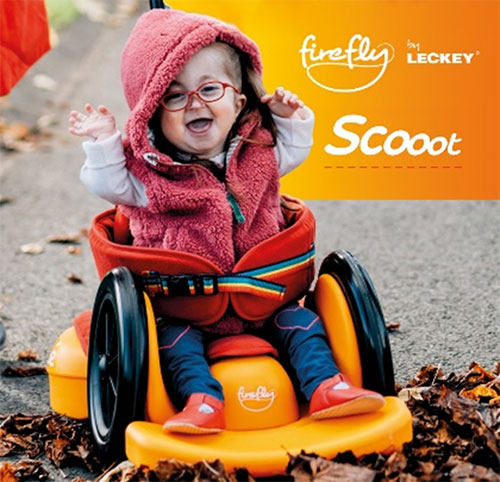 Collaboration with Firefly by Lecky: Goto and Scooot

There are an estimated 30,000 children in the UK with Cerebral Palsy with around 99% living at home and supported by their families. Up to 45% of those are likely to have at least one serious physical impairment. The cost of bringing up a disabled child is around three times that of a non-disabled child, yet the average family income is likely to be over 20% lower than the national average.  In this context, through its research, the Cerebra Innovation Centre has developed, evaluated and shared new inclusive approaches to design problems and provided creative, inclusive and innovative design solutions to enable participation and tackle issues families raised with us. The success of this design process have seen both Goto and Scooot launched on a commercial basis through licensing arrangements with Firefly by Lecky.

The Goto seat was originally designed in response to a parent request for help taking a child to the supermarket. The child was unable to sit up un-aided, but the parent was unable to push a specialist wheelchair and supermarket trolley at the same time. Initial design and prototypes were made and tested with the child in a supermarket to test suitability, support, adjustability and fit. Following an iterative range of prototypes and trials mother and child were able to shop at leisure.

The story was reported in Cerebra’s quarterly magazine and sent to 15,000 homes. Many requests were made for a similar unit, so the team developed the concept and redesigned for larger scale manufacture. Three batches of 20 units were made by machine and hand and shipped to parents in UK for testing. The feedback was overwhelmingly positive with families using the seat, not only in shopping trollies, but in park swings, ride-on toys, kayaks, aeroplane seats, cafes and beaches.

The support offered by the thin format, fold-flat seat enabled children with complex seating needs to participate in family and peer activities which had been unachievable before.  Given the positive experiences and continued demand, the design was licensed to the company Lecky (NI), who collaborated with CIC to further refine the design and launch the products in December 2014 with a new brand, Firefly.  T

Overwhelmingly positive feedback was received from the disability community, the Goto seat was enabling families to access activities they had never thought possible.  The immediate success of the launch of Leckey’s subsidiary brand, Firefly, was pivotal upon the take up and success of the Goto seat with sales exceeding 13,000 units on an Following the success of Goto, CIC and Firefly entered into a second collaboration for the Scooot sat which has been trialled and used by 40 children referred to CIC by Cerebra. Scooot was launched by Firefly commercially in 2015.

A significant increase in wellbeing is demonstrated within those families by being able to discover and explore the world together, with fewer boundaries and greater integration, something most people take for granted. Many of the children within this demographic have additional complex needs such as sensory and physical deficiencies; as such, an activity as benign as shopping, offers a huge range of sensory input, as well as inclusion, integration and interaction with people and society. Their level of well-being is increased in such activities. User feedback from families’ records that they have been empowered to undertake activities, attend events and even long-haul holidays with minimal additional equipment to support their child.

Tandem seated surfboard for disabled use 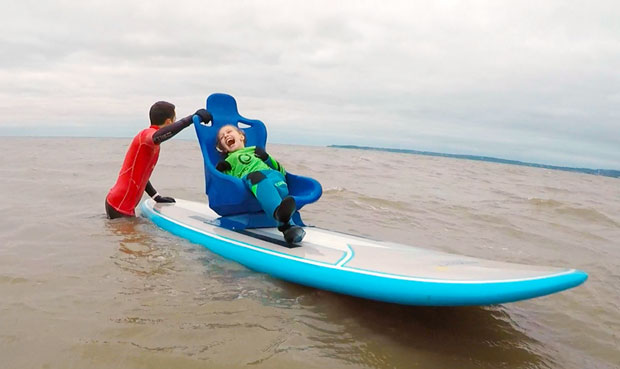 Tandem seated surfboard for disabled use, in use at Benone Beach, NI, July 2018

Tandem seated surfboard for disabled use

Created in partnership with Surfability UK and Roger Cooper, the surfboard was designed for children with brain conditions and also those with limited mobility. It allows wheelchair-bound adrenaline junkies to get out of their chairs and onto the water. The tandem design includes a supportive seat for the child and plenty of space on the back for an experienced surfer to steer it in the right direction. They have been a great success providing endless hours of fun to thrill-seeking children who could not otherwise experience the benefits and thrill of catching waves.

Four tandem seated surfboards were charitably funded and distributed to various specialist surf schools; Surfability, Wave Project Newquay, Wave Project Aberavon, and a further three units have been bought by other charitable organisations; Wave Project Isle of Wight, Mae Murray Foundation, Larne, and Sean’s Club, Japan.  The development of the board and its safe use subsequently informed international standards for disabled surfing and enabled the co-developer, Benjamin Clifford, to achieve accreditation with the Welsh Surfing Federation to train surf instructors in disability surfing.  The assistive device is available for public use at the following locations: