Craig Wood is a practicing, internationally acclaimed Site Specific artist. His output is primarily three dimensional and lens based with text and audio increasingly utilized in his more recent projects. 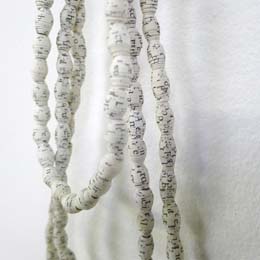 The major research question directing Craig's professional practice, is an examination of the properties of ‘site’ or ‘context’ and how this drives creative processes and their concomitant outcomes.

As a graduate of Goldsmiths College, London in 1989, Craig was a part of the initial Young British Artists movement, exhibiting in the seminal Modern Medicine exhibition and later having commercial representation through galleries in London, Paris and Turin.

In addition, Craig has worked on the visiting lecturer program at Goldsmiths College, MA Fine Art, London and held the post of Gregory Fellow in Sculptural Studies, Henry Moore Foundation at University of Leeds, 1997-2000.

Craig's work is in major collections such as; The Tate, Saatchi, V&A and UK Arts Councils. His mode of practice continues to expand into collaboration and curation.

Out Of Nothing at The Centre of Contemporary Art Tbilisi, Georgia, 2014.

The wallpaper Frames (in collaboration with Chris Taylor) has sold over 160,000 rolls internationally and continues to receive acclaim as an exemplar of interactivity in an art/design crossover.

Wood has received numerous awards including;

In 2014/15 Wood co-curated with Peter Finnemore and participated in, the multi disciplinary exhibition and events under the title Public Information, featuring established visual and sound artists along with students from Swansea College of Art, UWTSD.

Since 2000 Craig Wood has worked with Chris Taylor, University of Leeds on the interactive wallpaper project Wallpaper to Complete.