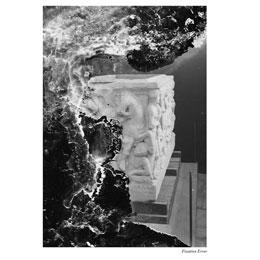 ‌Through temporally inflected models of photographic practice, Ryan L. Moule's research is interested in the dissolution of the photographic image, and is particularly concerned with notions surrounding latency, and the concept of non-photography.

In an age defined by technological progress, with many digital systems seeking to 'end forgetting', Ryan's work challenges this facility, reinstating the importance of mythologies through the disappearance of trace.