Dr Catriona Ryan is an Irish poet and academic. She has an international reputation for her work in Irish fiction and theatre. 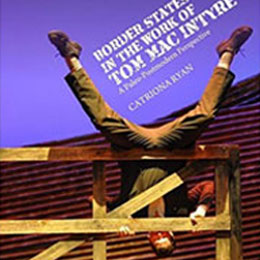 In 2012 Catriona published a book on the work of Tom Mac intyre which was hailed by the distinguished professor of English literature at Glasgow university as a ‘pioneering work of criticism’. He said she is the first academic to bridge the gap between Yeats and Joyce.   Catriona is a world authority on the work of the Irish writer, Tom Mac Intyre.

For that research Catriona developed a new critical theory, paleo-postmodernism which Maley praised and Catriona uses in other areas. Catriona has also developed a poetry writing process called ‘Transmorphic Hermeneutics’ which was nominated for the Ted Hughes Poetry  Award.

She has used it with successfully with artists and is now applying that interdisciplinary research into architecture. Catriona's research interests  are literature, creative writing, visual aesthetics, architecture and theory.

(It has received excellent critical reviews.  The most recent being Professor Willy Maley’s review in the current edition of the peer-reviewed Litteraria Pragensia where he has referred to it as being a ‘pioneering work of criticism.’  See Maley, W. (2013) Review of: Catriona Ryan, Border States in the Work of Tom MacIntyre: A Paleo-Postmodern Perspective. Litteraria Pragensia: Studies in Literature and Culture, 22 (44). pp. 131-134. ISSN 0862-8424)

I am in the process of writing a proposal for a monograph with Palgrave/Macmillan on paleo-postmodernism.  The commissioning editor, Paula Kennedy, has expressed an interest.

Ryan, Catriona (Curator) “Alchemy of Place” subsection of the main “Lyric One” exhibition.  Explored different responses to the poetry of Dylan Thomas.  Mission Gallery, Swansea, October 2014.  My methodology and research behind this exhibition was nominated for the Ted Hughes Poetry Award by Cinnamon Press in 2014.

Received £1000 from the Welsh Arts Council for the Civic exhibition.