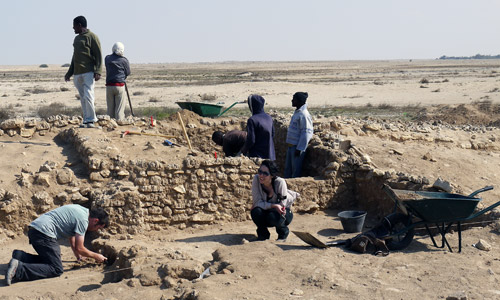 This project is part of the Qatar Islamic Archaeology and Heritage Projects which is run in collaboration with the Qatar Museums Authority and the University of Copenhagen.

The Wales Qatar project is concerned with the research excavation and survey of number of coastal sites in northern Qatar.  Currently the University is working under the direction of Dr Andrew Petersen on two sites, Ruwaydha and Rubayqa, (see below).  Preliminary reports on both sites have been published in the Proceedings of the Seminar for Arabian Studies.  The excavation team comprises a number of former students of archaeology from the University.

In addition to fieldwork in Qatar, Dr. Petersen has also organised a conference on the archaeology of Wales and Qatar in partnership with LNG South Hook. This international conference, Nations of the Sea, was held at the National Museum of Wales in Cardiff in September 2010 and brought together researchers from diverse backgrounds to discuss common themes in the archaeology of Wales and Qatar. Plans for publishing the proceedings are currently in progress.

In addition to students and former students the project benefits from the expertise of ceramics specialist Tony Grey and zoo-archaeologist Hannah Russ both of whom are research fellows in the School.

Ruwayda is a large coastal site located in a shallow bay on the north-western tip of Qatar between the deserted settlements of al-Khuwair and al-Jumayl. The remains comprise a large fortress and extensive traces of a settlement stretching for two and a half kilometres along the shore. The site comprises the following main elements:-

Excavations at the site of Ruwayda have recently been completed for the season. Now in its fifth season, excavations focused within the Qal’ ay Ruwayda or fort complex within the site. At the centre of the site there is a large square enclosure measuring more than 100 metres per side with the remains of towers at the corners and along the sides of the walls. The interior of the fort is divided into a series of rectangular enclosures which appear to have been built at different times.

At the north-east corner of the fortress next to the sea there is a square courtyard house which probably functioned as the house of the ruler. This season’s excavations focused on determining the extent and phasing of fort complex. The excavations were very successful in terms of our understanding of Ruwayda and saw a hugely significant find in the form of an animal, possibly oryx, representation made from worked bone. The find was located around one of the towers of the fort and given the special standing this animal has within Qatar the find is deeply symbolic and important.

The work being carried out by the University of Wales at Ruwayda is multi faceted and involves excavation, survey, conservation and outreach work.The Ruwayda Archaeological Project has a dedicated Facebook page. The page is an excellent way of following developments on site and the work of the project in Qatar.

(A report on the first season of excavations is published in Proceedings of the Seminar for Arabian Studies 40, 2010)

Rubayqa is located in northern Qatar on the Ras al-Sharig Peninsula. The excavations were carried out for the Qatar Museums Authority by the University of Wales in advance of planned development work in the area. The team would like to thank Faisal al-Naimi Head of Antiquities, Dr.Sultan Muhesin and the QBC staff for initiating and supporting the excavations.

Initial inspection of the site indicated perhaps a few houses but during a four month season more than fifty structures were uncovered. Written historical sources first mention Rubayqa in the eighteenth century when it was attacked by the Wahabis. Captain George Brucks of the British Navy surveyed the coast of northern Qatar in 1824 and described Rubayqa as a village with a population of 150 people from the Uttoobee tribe.

The location of Rubayqa is unusual for northern Qatar because there is direct access to deep water so that ships can come very close to the shore. The site  covers an area approximately 500 kilometres North-South and 200 metres wide next to a small bay. The excavation concentrated on three areas A,B and D.

In all areas the buildings were built of stone although there was evidence for wooden roofing material and post holes. In each of the areas a number of date pressing installations were found.

A wide range of finds were retrieved form the excavations including pottery from China, Myammar, India and elsewhere. Cannon balls were also found. It is probable that these were fired at the site from a ship offshore.

The most unusual feature of the site is the large number of date presses (at least twelve). Most of the buildings excavated had at least one date press (madbassa). Although date presses have been found at other sites in Qatar (Zubara and Zikrit) the question is why were there so many in this village. Date presses are known in the region from 2nd millennium BC and are particularly numerous in Bahrain and Oman. Although there have been date plantations in Qatar in the past it seems likely that the dates at this site were imported as there is no suitable area for date palms in the vicinity. In any case the large number of date presses at the site suggests that this was a wealthy settlement in the eighteenth and nineteenth century. A report on the excavation is in press for the Proceedings of the Seminar for Arabian Studies 41.