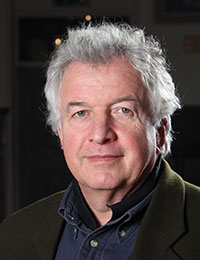 Nicholas Campion is Principal Lecturer in the Faculty of Humanities and the Performing Arts, Associate professor in Cosmology and Culture, Director of the Sophia Centre, and Programme Director of the Master's degrees in Cultural Astronomy and Astrology, and Ecology and Spirituality. He is also Director of the University's Harmony Institute.

He read history at Queens’ College, Cambridge, gained his MA at the School of Oriental and African Studies, London, in Southeast Asian Studies (Politics, History and International Relations) and was awarded his PhD by the University of the West of England, for a study of contemporary belief in astrology.

His research interests include the history of astrology and astronomy as well as the place of both disciplines in contemporary culture; utopian, millenarian and apocalyptic belief, magic, New Age and pagan ideas and practices, and the nature of belief in general. He has written about the 1960s counterculture and the invasion of Iraq in 2003 as utopian projects.

He is editor of Culture and Cosmos and is on the editorial board of the Journal of Skyscape Archaeology. Currently he is Series Editor (with Richard Dunn) of the six-volume Cultural History of the Universe, to be published by Bloomsbury in 2022. He is on the International Executive Committee of the conferences on the Inspiration of Astronomical Phenomena.

He has been involved in documentaries for BBC1 and Channel 4 (UK), and the Discovery and History Channels, and his radio credits include ‘Loose Ends’, ‘Devout Sceptics’ and ‘Saturday Live’ (all BBC Radio 4).

Other Sophia Centre Staff include: