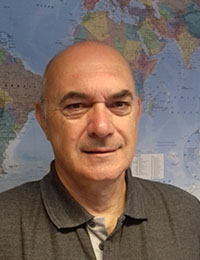 Notions of progress and development first struck me in my teens when I spent a year, away from Dynevor School, Swansea,  in what was then British Honduras. My dad was on secondment with Barbara Castle’s new Ministry of Overseas Development – and I studied at the Jesuit-run St John’s College in Belize City.

Chairman of the Young Socialists in the 1970s and Labour’s National Youth Officer in the 1980s, I was elected Labour HQ staff convener 1983-1988, dealing directly with the major players on Labour’s NEC in those turbulent years.

In 1988, I joined VSO’s staff, supporting technical development interventions, mainly in Africa, recruiting skilled personnel and designing their pre-departure adaptation training, in close collaboration with the Intermediate Technology Development Group (set up by E F Schumacher) and the Water, Engineering and Development Centre at Loughborough University. I regularly taught courses including Appropriate Technology, Adapting Technical Work Practice and Personal  Safety and Security for Development Workers. I remained a trainer for VSO until 2004. While at VSO, I had the opportunity for field research in Kenya on rural water supply, informal sector economy and community-based building, and on technical/vocational education provision in Kenya and Uganda, Zimbabwe, Ghana and Namibia.

From 2000-2014, I co-managed European Voluntary Service projects in and from Wales and in 2015 I joined the UWTSD staff as Senior Project Officer on the EU-funded Rural Alliances project.

In 2018, I was Visiting Tutor at Swansea University on Human Rights, Humanitarian Intervention and Global Justice on the MA International Development and Human Rights programme.