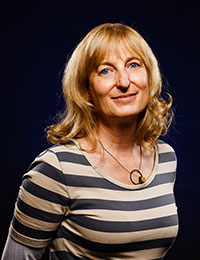 Until 2014 Head of School of Applied Arts and Art Practice. Since September 2014 Honorary Research Fellow, Faculty of Art and Design, School of Design and Applied Art.

‘Drawing, Permanence and Place’-co-curator and exhibitor

Exhibition for SNAG (North American Society of American Goldsmith), co-curator and exhibitor. Cross-continental (Germany, UK, Australia and North America) dialog between the selected artists via the medium of a blog. http://heat-exchange.crimsoncactus.net Shemer Art Center and Museum, Phoenix, Arizona, May 2012

An exhibition investigating digital crafts, curated for ‘Craft in the Bay’ and touring to the University of Hertfordshire. The catalogue was supported by the Arts Council of Wales.

My creative practice and research focuses on vector- and image-based digital technologies, examining their potential and impact on traditional crafts processes, particularly in the ‘fire arts’ of vitreous enamel and glass. I am passionate about the enamelled surface and artefact and how to develop its rich possibilities and history in a contemporary applied arts context. Over recent years I have concentrated on developing a visual language and drawing styles in relation to available digital technologies. My creative practice explores how new concepts, techniques and materials can enrich the field, predominantly through the use of laser/water jet cut steel and intricately, laser engraved vitreous enamel surfaces. Recently I have begun research into 3D printing technologies and post-processing techniques such as electro-plating.

Primary areas of experience and related skills are:

National Advisor for the Arts Council of Wales and contributing to their investment review.