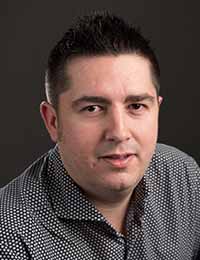 The day-to-day management and coordination of the programmes at Wales International Academy of Voice.

David Bebbington gained a BMus (Hons) degree from the Royal Welsh College of Music and Drama where his principal study was piano and second study voice. He won the John Ireland Prize for Piano and Vocals whilst at the RWCMD, where he worked closely with many of the vocal students. David represented the RWCMD on many occasions as an accompanist during his time there, most notably for masterclasses at the National Eisteddfod of Wales and as a jazz pianist for the Wales Rally GB Awards. David was awarded a scholarship for the academic year 2001 – 2002 to take up post as Director of Music for Cardiff University Church Choir. He followed this by earning himself a permanent position as Director of Music at the Church of St. John the Evangelist, in the Parish of Maindee, Newport.

David works for/with several agencies and with many high-profile musicians and performers including LIVE, Funky Entertainment, BMusical, Figment of Funk and Spice Fusion.

Prior to arriving at Wales International Academy of Voice David has had an extensive career within Higher Education as a lecturer, programme leader and manager working on a range of Music, Popular Music and Musical Theatre programmes.

David is currently External Examiner for the BMus (Hons) Popular Music programme at the University of Wolverhampton. He has previously acted in this capacity for De Montfort University BA (Hons) Performance in Musical Theatre and for University of Sunderland BA (Hons) Music, BA (Hons) Performing Arts, FDA Music and FDA Applied Music Practice. He acted as a Higher Education Subject Advisory Group member for the Welsh Joint Education Committee (WJEC) A Level Music in 2014 and as an External Expert Advisor for the Creative and Cultural Industries Subject Network Review at the University of the Highlands and Islands in 2011.

David is a practicing musician, regularly performing a large range of repertoire across the UK and overseas. His current research interests are in the ‘role of the keyboard musical director in contemporary music contexts’.

David’s recent project is Figment of Funk; a Jazz/Fusion outfit featuring renowned session musicians and lecturers from a range of HE institutions. Kasabian’s Ian Matthews features as guest artist for some of their masterclasses and performances.