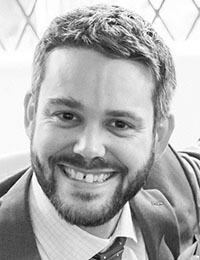 Dave joined UWTSD in 2017, have previously been taught History, ICT and Welsh Baccalaureate in a large Swansea comprehensive school where he held a responsibility for E-Learning across the curriculum.

Between 2014 and 2016 he was seconded to the Hwb team in Welsh Government.

He has contributed to a number of Welsh education networks, including #addcym and NetworkEdCymru, and has spoken and led workshops on various aspects of teaching and learning nationally and internationally.