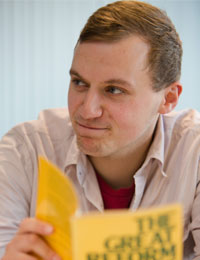 I teach on the history programme within the Faculty of Humanities and Performing Arts. I contribute to various modern history modules at undergraduate and Master's level, lecturing on topics including urban history, civil disobedience, representations of war, heritage tourism and US history. I also supervise undergraduate dissertations/independent projects, and act as students’ personal tutor.

I joined the University of Wales Trinity St David in 2015. Previous to this, I was employed by Lancaster University, where I also obtained my doctorate (in History, 2014).

My area of interest is modern cultural history, with a specific focus on the histories of cities and museums. I am also interested in the politics of memory and theories of modernity and postmodernity, and how these relate to the practices and discourses of historians.

My approach to learning, research and teaching is interdisciplinary, drawing insights from critical theory, art, literature, anthropology, cultural geography, psychoanalysis, memory studies, and media, film and cultural studies. As I have a background in American Studies, my teaching and research often touches upon the history of the United States specifically.

My teaching duties reflect the above set of eclectic interests. I lecture on topics ranging from the French, Haitian and Industrial Revoltions to post-WWII decolonisation; from the founding of European colonies in the New World to the Culture Wars of contemporary US society; from representations of war in cartoons of the Napeolonic era to the video games of the 21st century; depictions of the city from Baudelaire's 'disovery' of modernity in Victorian-era Paris to David Bowie's Berlin albums; from prison reform of the 19th century to British youth subcultures of the 20th century; from the Romantics' 'invention' of tourism to heritage-led urban regeneration strategies of the present day.

AHSK4002 Skills for Academic Study in the Humanities

AHHI5016 Introduction to American History: From Columbus to the Present Day

AHHI7023 Looking Back: A Study of War Memory and Commemoration

My research explores various aspects of modern cultural history, with special emphasis on cities and museums. In 2014, I received a PhD from Lancaster University, with a thesis that examined the history and contemporary status of museums in Liverpool.

As the holder of degrees in American Studies (BA) and Film & Cultural Studies (MA), I have a diverse set of interdisciplinary research interests. In particular, I am an admirer of the literature of Orhan Pamuk, and have a longstanding research interest in the history of international exhibitions.

In the near future, I plan to produce a book manuscript consolidating my research on Liverpool museums. I am also expanding existing interest about connections between scientific discourse and the exotic animal trade during the Victorian periods.

My expertise concentrates on the history of museums and cities – and Liverpool in particular. I am also conversant in relevant theoretical concepts and approaches. My work draws on theories of memory plus the ideas of thinkers such as Walter Benjamin, Michel Foucault, Tony Bennett, Andreas Huyssen and James Clifford. In addition, I have a background in American Studies and Film & Cultural Studies.

Book Review: Before the Windrush: Race Relations in Twentieth-Century Liverpool by John Belchem in The Transactions of the Historic Society of Lancashire and Cheshire (forthcoming)

Essay: ‘Missing Links and Nondescripts: A Cultural History of Chimpanzees and Gorillas in Victorian Liverpool,’ part of edited collection on animals and empire for Manchester University Press Studies in Imperialism series (in preparation)

Book Review The Lives of Chinese Objects: Buddhism, Imperialism and Display by Louise Tythacott in Ex Plus Ultra: Journal of the Worldwide Universities Network (Vol. 3, April 2012)

We and the World: Liverpool Museum in the Age of Empire, 1850–1914 (book manuscript in preparation; planned submission to Liverpool University Press)

I have presented my work at numerous academic conferences, including ones held in Germany and China.