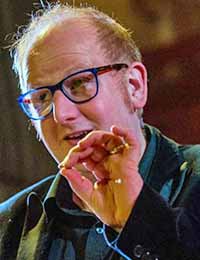 Senior Lecturer and Director of CBC

Eilir has worked for the University for 15 years and was responsible for developing the new and innovative Welsh Medium BA Perfformio programme. In 2018 Eilir was instrumental in the introduction of the MA in Perfformio, cyfarwyddo and Musical Theatre. Also the two year Musical Theatre Degree.

Eilir Owen Griffiths is one of Wales’ most dynamic choral directors. With over 15 years’ experience as a Musical Director and a composer, he has conducted his award winning choir CF1 since its formation back in 2002.

Eilir was the Musical Director for Llangollen International Eisteddfod from 2010 - 2017. He has won many awards for his work as a composer including ‘Tlws y Cerddor’ (Musician’s Award) at the National Eisteddfod in 2008.

Eilir has conducted many different choirs over the years. He was previously the Musical Director for Côr Godre’r Garth between 2004 and 2014 where the choir managed to win the mixed choir competition no less than five times at the National Eisteddfod under his directorship. Eilir was also one of the first Musical Directors for the Cardiff Blues Choir which was formed as part of the Codi Canu series on S4C back in 2006 and he also conducted the Trinity Saint David Carmarthen choir, the winners of the Youth Category in Côr Cymru in 2007 and also Dyffryn Tywi School of Performing Arts. He was awarded the Best Conductor Award in Cor Cymru 2017 and also the Conductors Prize at the Derry International Chopral Festival 2018.

Eilir has accepted a number of invitations to travel as part of his work as a conductor to Ireland, Germany, Poland, France, India and the United States and he also contributes regularly to television and radio programmes including the Urdd and National Eisteddfod.