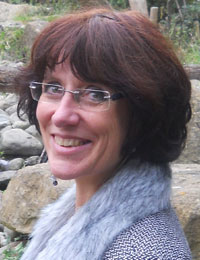 Teaching across a range of subjects, writing and delivering modules

Contribution to the school organisation

Dr Williams is involved with the BA English and BA Creative writing courses within the School of Cultural Studies. She contributes to the MA Creative Writing Programme and runs a number of MA Literary Studies modules.  As a published poet herself, she is keen to promote the reading and interpretation of poetry.

All her work is focused around developing textual discrimination and an awareness of the relation of texts to the reader. As part of this concern, she has developed modules that focus on the techniques used by conspiracy theorists, in fake news dissemination, and in the grooming activities of a range of extremist groups

This interest in the peripheral and the marginal has drawn her to both postcolonial criticism and gender studies and a braoder engagement with other cultures. She has published widely on Welsh Writing in English, women’s writing, psychoanalytic criticism (including gender studies and the politics of the family).  She has been an external examiner for English literature, and Language at MSA University, Cairo since 2014. Since its inception in 2015, she has been a regular peer reviewer of the African Multidisciplinary Research Journal, published from St Pauls University, Nairobi, Kenya.

She has written widely on literature, theatre and art in Wales for publications including New Welsh Review and Planet, the two leading cultural journals within Wales, and was the theatre reviewer for New Welsh Review from 1997-2001. She was invited to contribute an essay on performance and place-based art - ‘Place, Space and Self: Site-Responsive Art in a Globalised World, to Journal of Writing and Creative Practice special edition: Place-based Arts  January 2016.

Dr Williams has published poetry in a range of different journals including Agenda, New Welsh Review, New Writing, Orbis, Planet, Poetry Wales, The London Magazine, Wales Arts Review. She published her first collection, Being the Famous Ones, (Parthian) in 2009. Her poem, ‘Histories’, was shortlisted for The Live Canon International Poetry Competition 2016;’The White Room’ was long-listed for the University of Canberra Vice Chancellor's International Poetry Prize 2016;

She has been running occasional writing workshops with Swansea-based Women asylum seekers and refugees since 2006. Many performances and readings have resulted and she has co-edited and written introductions for two volumes of writing: Fragments from the Dark (Hafan, 2006) and My Heart Loves in My Language (Hafan, 2017)

ART: She provided the catalogue essay/afterword, 'Testifying to “time’s reckless melt”’, for the National Library of Wales touring exhibition of I.C.Rapoport’s photographs of Aberfan, Aberfan: The Days After, (Parthian, 2005). She is the contributing editor of  Sideways Glances: five off-centre artists in Wales (Parthian, 2005) and composed the introduction to Clyde Holmes, Feather Paths(Gwasg Carreg Gwalch, 2004).

2017     (i) ‘‘No empty place is really empty’: Reframing the Medieval in a Globalised World’, Past Peoples, and Present Society, Faculty Research Series, UWTSD, Lampeter, November

(ii) ‘The Art of Revolution: Russian Modernism and the Exploration of Space and Time’, Lenin’s on Sale Again: 100 years of the Russian Revolution, UWTSD, Lampeter, October

Jeni Williams is involved with the BA English and BA Creative Writing Courses within the Faculty of Humanities and Performing Arts. She teaches on both the MA Literature and the MA Creative Writing programmes.

Drawing on both her interest in theatre and her doctoral research into literary history, centrally interested in issues of marginality, Dr Williams has focused on issues of gender and culture within modules devoted to subjects as various as Enlightenment Writing, Victorian Writing, Modernism – She is deeply interested in the identity politics of  marginalised nationalities (Welsh Writing Wales; past modules in Reading Identities and Postcolonial Revisions).

As a published poet herself, she is keen to promote the reading and interpretation of poetry. She has translated individual poems from Arabic and Chinese and a collection from Swedish.

My doctoral research explored the historically shifting significance of the figure of poetry, the nightingale, in Europe, seeing it as an index of broader cultural changes. I examined the way the myth of Philomela informed literary texts from classical Greece, Christian Latin verse and a range of canonical and non-canonical poems from the early medieval period to the nineteenth century.

For the monograph I reduced the historical range in order to focus on a more overtly theoretical reading of the material, drawing in particular on feminist and cultural materialist approaches. Interpreting Nightingales has been widely reviewed, including pieces by Jennifer Wagnor Lawlor in Victorian Studies, (41:4 (Summer, 1998), 648-650), Norma Clarke in Gender & History (11:2 (July 1999), 285-288), and Corinne Saunders in Medium Aevum, (LXVII (1999):169). It has been widely referenced.

This double focus - historical breadth on the one hand and the theorisation of gender and culture on the other - has proved invaluable throughout my career, enabling me to teach a wide range of literary periods and underpinning the gender and culture focus of most of my other teaching. Although my recent publications have focused on Wales, my earlier research, together with my current teaching experience, demonstrate that I am well versed in more canonical literature.

My ongoing work on the unstable boundaries of gender and culture, and on the uncertain relations between the two, has  continued to complement my interest in the Anglophone writings and wider culture(s) of Wales and fed into my deep interest in other cultures.

Apart from the skills of writing and assessment associated with my profession as a lecturer I have additional expertise:

2017  Contributing ed., with introduction, My Heart Loves in My Language, Swansea: Hafan Books,

2009 Being the Famous Ones, Cardigan: Parthian, pp.90. (POETRY COLLECTION)

2008 Contributing ed., with introduction, Fragments from the Dark: Women Writing Home and Self in Wales, Swansea: Hafan Books, pp.160.

ESSAYS IN BOOKS AND PEER-REVIEWED JOURNALS

2016     ‘Place, Space and Self: Site-Responsive Art in a Globalised World, invited contribution to Journal of Writing and Creative Practice special edition: Place-based Arts

2009 ‘Adventures in Language: Contemporary Welsh Poetry in English,’ in Jim Persoon and Rob Watson, eds., The Facts on file Companion to Twentieth Century British Poetry: 1900 to the present. (New York: Facts on File).

(iii) ‘The wandering eye and its resting place: the work of Pete Bodenham,’ Sideways Glances: exploring the art of five off-centre artists in Wales, Parthian, pp.51-76

2014     ‘The Little Cakes and the Rose in Winter’, Wales Arts Review, http://www.walesartsreview.org/poem-the-little-cakes-and-the-rose-in-winter/

(i) ‘Making a Life’, ‘Puzzles’, New Writing: The International Journal for the Practice and Theory of Creative Writing

(i) ‘But is it Theatre? New Circus and the Spectacular NoFit State’, New Welsh Review, 68. Selected by Wales Arts International to promote the arts in Wales.

(ii) ‘Publishing for Children in Wales: Stories of Secrecy and Neglect; But the Occasional Heroine or Hero Wins Against All the Odds,’ NWR, 65: 30-38.

(i) ‘‘No empty place is really empty’: Reframing the Medieval in a Globalised World’, Past Peoples, and Present Society, Faculty Research Series, UWTSD, Lampeter, November

(ii) ‘The Art of Revolution: Russian Modernism and the Exploration of Space and Time’, Lenin’s on Sale Again: 100 years of the Russian Revolution, UWTSD, Lampeter, October

(v) Reading and discussion of work in My Heart Loves in My Language, Cardiff Book Fair, Angel Hotel, September

(iii) Public readings from Are You Happy With That? (new Hafan anthology), including reading my translations of the Sudanese poet Amnai Bakhiet while she read the Arabic originals (January)

(iii) ‘Anthologising the Margins: The Hafan Project’, Canons and Canon-Building: Framing the Literatures of Wales

(i) Professional report on the work of video artist  Helena Eflerová:  Arts Council of England

(ii) Interviewed by Neil Bartlett about the symbolism and literary traditions associated with the nightingale, (The Night Singer : BBC Radio 4, Mon 23 Sept)

(i) One of 4 invited speakers, ‘Swansea Assembly’, National Theatre of Wales, Swansea: 22 April.

(iii) I was involved in preparing the academic brief for the Creative Oracle (CORACLE) INTERREG project which sought to maximise the economic, social and cultural value of the creative and cultural arts to the regions of South West Wales and South East Ireland.

(ii) Readings of my translations from the Arabic of Amani Omer Bakhiet, AWEN International Festival of Poetry and Film, Atrium, Cardiff: 12-13 June.

(i) Pre-performance interviews with composer John Metcalfe and librettist Larry Tremblay on their opera, A Chair in Love, premiered in Taliesin Arts Centre, Swansea: 21-22 October.

(iii) Interviewed I.C.Rapoport about his images of Aberfan in the Channel 4 Tent at the Hay Literature Festival: May 30.

(v) Marked the launch of Sideways Glances by organising 5 successful multidisciplinary arts events across Wales, drawing on local talent- including refugee and disabled artists - to promote a positive sense of a diverse cultural community: Feb.10-March 24.

(i) One of ten ‘experts’ consulted by The Western Mail to contribute written statements for two-page spread discussing the future of the Arts Council of Wales: August 27.

‘Open Letter on the future of the Arts Council of Wales,’ Comment section, www.theatre-wales.co.uk : August 17