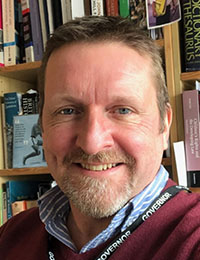 My career in public services began 35 years ago upon joining the Ministry of Police as a Police Constable. This provided an early insight into the operation of the UK government, how policies impact on society and on the power of the media to shape debate.

Following a fantastic and life-changing 4 years studying philosophy at Swansea, I worked as a Care Officer with adults who had learning disabilities, then for 5 years with Looked After Children and their families within a large local authority social services department. This was the best and worst of roles: the best because often I was one of the few positive, non-abusive adults that the children had known; the worst because some of the children I had the privilege of looking after died tragically young.

As a civil servant at the Welsh Assembly and manager in the Child and Family Division, I helped to oversee Children First as the Welsh Government’s drive to transform social services for children in Wales. The opportunity to work in national government opened my eyes to the commitment of the Welsh Ministers, the diverse challenges of developing a new government, the power of professionals and professional bodies, and the nature of the civil service.

After an enjoyable post overseeing 49 community buildings delivering community recreation services to Swansea, I became the Chief Executive Officer of the Hill Community Development Trust in Townhill, Swansea and stayed in that post until November 2014. The Trust was set up to build on the foundation laid by the only European Union Urban (I) Community Initiative in Wales. My challenges were broad and diverse, but in essence, the idea was to take a grassroots approach to tackling very long-standing issues, to provide much needed community services and to generate an income stream thereby reducing dependency on government grants. It is fair to say that this approach was more successful than anyone dared to hope on day one. It is an example of best practice which has been built upon in many parts of the UK and beyond.

In the 2017, local elections I was honoured to be chosen to represent the community I was born in as a Councillor for the City and County of Swansea. Local government in Wales faces many, varied challenges as the purse strings continue to get tighter. Bright-eyed innovation and new ways of working will help to ensure that the people of Wales continue to access the services they need and depend on.

Concentration on the diverse challenges of realigning public services in the UK at a time of significant challenges, with consideration of alternate models for public service delivery where cost savings, engagement of the font-line and community engagement are the critical area to be explored

Looked After Children: in some areas, we have seen a doubling of the LAC population within 10 years. At the same time budgets have never been tighter, major investigations into the most tragic cases of child abuse have seen professionals under the intense examination of the media microscope

Democracy and political structures: with the memberships of the major political parties at approximately 10% of their post-war levels, have we seen the steady growth of a political class which is remote from the lives of ordinary everyday people? What impact does this have on the design and delivery of policies? How has this membership evaporation affected the political landscape of Wales?

I have professional experience in a range of areas:

My main achievement rests with the development of the Hill CDT Ltd from an innovative high-level, 100% government funded enterprise, to a community owned and managed organisation which, from a standing start, consistently generated £250k pa through trading activities. In total, I led the organisation to secure £4.5m over 12 years, 50% in self-generated income.

Child Poverty seminars for colleagues across Wales to get to grips with the many challenges of the Welsh Government’s ambitious Child Poverty agenda.

Support for a number of health service innovations including developing GP Clusters.

2020: From Despair to Hope: building harmony in a challenged community. Chapter in The Harmony Debates. Lampeter: Sophia Press.

2012: Trust and Partnership: why community ownership and close collaboration are the keys to future success. HCDT Ltd: Swansea

2011: The Townhill Baseline: a springboard for action. HCDT Ltd: Swansea

2004: ‘Who Cares? A week of investigation into child abuse in Swansea with S Bailey. South Wales Evening Post. October 2004.

1993: ‘Flying a Philosophical Flag’: an examination of the importance of philosophy for children. Western Mail.

In recent years I have presented papers at a number of events: