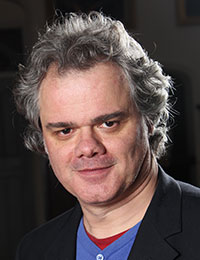 Head of School of Cultural Studies

As well as being Head of School, I’m Course Director for the BA in English and the International Foundation programme.

I was appointed Head of School for the School of Creative Arts and Humanities in 2005 and Head of the School of Cultural Studies in 2010. As HoS I am currently responsible for the overall management of a School which offers undergraduate degrees in English, Creative Writing, Philosophy and Chinese Studies, Joint Hons.

Combinations of those subjects, and MA degrees in Philosophy and Creative Writing. In this role I manage HEFCW derived and income generation (third mission) budgets, HR and related issues, and lead on curriculum development, including areas such as TEL, across the subject provision, as well as leading on the delivery of  a range of English and Creative Writing modules at undergraduate and postgraduate level.

I have played a full role in key institutional level activity at TSD, including QAA Institutional Audit, IIP and Management Planning Away Days; and in the creation of key documents, for example, the Faculty Strategic Plan, T+L Strategy, Draft IP Policy Document.

I have been involved in a number of income generation activities for example:

2003-4: I collaborated with the travel writer John Harrison on an AHRB/Academi funded project exploring the connections between creative writing practice and the techniques of travel writing. (£10,000)

2007-8: I was the lead academic on a KEF project total value c.£64,000 exploring the use of video and other technologies in   community-based projects and developing an MA in Creative Arts.

2009: I am a lead academic on the ‘Coracle’ Interreg (Territorial) bid (total value €1.6 m) having written two work packages linked to development of MBA Arts Management and Creative Writing.

I am actively involved in the School’s commitment to Widening Access, Taster Days, AUR and similar initiatives and to its development of funded QE opportunities for students eg Go-Wales placements. I have also delivered CPD programmes and contributed to summer school activity.

I teach on a wide range of creative writing modules, including modules on writing poetry and prose and writing workshops, I also contribute to other degree programmes within the school. In recent years I have taught in the following areas: the Eighteenth Century; Romanticism Contemporary Literature; and, Science Fiction.

I have supervised postgraduate work in creative writing and in areas related to my research interests. I am currently supervising research degrees on Jane Austen and the Psycho-Geography and Creative Writing.

My research has largely been concerned with Romanticism and aspects of contemporary poetry.

In 1995 I was awarded a PhD by the University of Hull for research on ‘Keats and the Aesthetics of Seizure’; my thesis reconsidered Keats’ poetry and thought in the light of contemporaneous aesthetic theories and the wider impact of the empirical method at the turn of the 19th century, particularly in the medical world in which the young Keats moved. I have published on Milton, Keats, Byron, Wordsworth, Wilde, Shaw, the sublime, contemporary poetry and the graphic novel.

In 2001 I completed work on a fully annotated edition of Keats’ poetry, with an 8,000-word critical introduction for Wordsworth Classics. In 2005 I completed a similar edition of the selected works of Byron. I am currently researching into and writing on contemporary poetry from New Zealand and on the interface between 19th Century poetry and science.

I also review regularly for a number of publications including Nineteenth Century Contexts, NAWE, Gwales, BRONZS, and BARS: Bulletin. I have attended a number of conferences in institutions throughout Britain and presented papers that reflect my research interests and I have worked as a reader for the University of Wales Press and the Welsh Books Council.

I have worked as a reader for the Books Council and University of Wales Press.