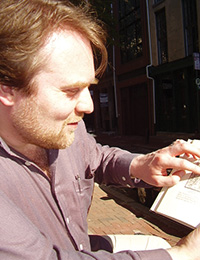 Programme Director of both the MA in Medieval and Early Modern Literature and the MRes in Early Modern Literature; School of Cultural Studies Officer for Assessment and for Learning, Teaching and Research Resources. I co-ordinate research seminars, including the Faculty of Humanities Research Lecture series. I serve on the University Validation Sub-Committee and two Faculty Working Groups – for Research and for Academic Quality and Standards.

Before being appointed to my current post I held a Fellowship with the Francis C. Wood Institute for the History of Medicine and a Leverhulme Research Fellowship. I also developed a classification system and created a catalogue database for a special collection library. Prior to this, supported by the Pughe Jones Open Scholarship, Traherne Scholarship, W.D. Llewelyn Memorial, and University of Wales Postgraduate Studentships, I graduated BA (Hons) and PhD in English from the University of Wales. I also received a British Academy Postgraduate Award to read for the MA in Critical Theory at the University of Sussex.

My approach to literary studies is informed by my continuous engagement with critical theory, and by my research in cultural and intellectual history. I aim to lead students to a coherent and fuller or more accurate understanding of literature, of its various contexts and relationships, and of critical, scholarly, and theoretical orientations. I am especially concerned to understand, maintain and develop the link between teaching and research in undergraduate as well as postgraduate programmes. I am motivated by the student experience of discovery and creation of knowledge and meaning, including understanding of self and others, through informed hermeneutic engagement with literary texts – engagement that is emotional, imaginative, and intellectual.

I welcome postgraduate research projects (MPhil and PhD) in Renaissance and early modern literature and in any area relating to my research interests. I have supervised PhD theses on the poetry of John Davies of Hereford and George Herbert, and I am currently supervising PhD research on ‘profane’ and ‘divine’ love in the works of John Donne. While my teaching responsibilities have reflected a commitment to the large historical span of English Literature from Anglo-Saxon to the present day, I have been primarily responsible for the development of courses in Renaissance and early modern literature, critical and cultural theory, and research methods and bibliography; though I continue to contribute to the teaching of medieval literature. The courses that I currently teach are the following:

My research falls within two fields: (i) early modern literature (focusing on the work of Phineas Fletcher, but extending to Spenser, Shakespeare, Davies of Hereford, Donne, Samuel Purchas, and Milton); (ii) the cultural and intellectual history, philosophy and theology of medicine, body and soul, particularly anatomy. This research frequently relates to ontological or epistemological questions, bibliographical and book-historical considerations, issues of interpretation, signification and representation, theory of metaphor and narrative, cognitive, psychological and psychoanalytic theories, and modes of poetic, philosophical, and theological vision or analysis which may unify that which has been dichotomized or otherwise divided. I aim to contribute to the theory and methodology of interdisciplinarity, particularly in relation to ideas of coherence, consistency, and congruity of disciplines, juxtapositions or opposed terms in the early modern period. Further particular and subsidiary interests in early modernity lie in the dichotomy into art (culture) and nature, and that into classical and grotesque, the paradox of ingenuity and invention as both discovery and creation, the analogy between anatomical and geographical discovery, the theological themes of creation, mortality and salvation, various aspects of subjectivity and self-knowledge, the discourses of sexual difference, desire, appetite, sensuality, love, and temperance, the genres of allegory, drama, lyric, encyclopaedic poetry, and literary anatomy, and the subjects of anatomical illustration and demonstration.

The Purple Island and Anatomy in Early Seventeenth-Century Literature, Philosophy and Theology

My first research project led to an authored book which argues that Phineas Fletcher’s allegorical anatomical poem, The Purple Island (1633), shares more with anatomy than any other literary work of the English Renaissance. The poem creatively develops the metaphor of “Man” as an island realm and as microchristus, discovering previously hidden aspects of the rational, coherent, and consistent figurality it shares with Renaissance anatomy textbooks. Moreover the contemporaneousness of the anatomy in the poem is not only congruous with the moral and religious allegory, but directly dependent upon the ingenuity and inventiveness of the poem’s figurative design. The poem’s critical reception, literary intertextuality, and form, suggest that its conservative method of shoring up established knowledge of the human body by extending conventional analogies becomes innovative by drawing similarities between recently discovered anatomy and ideologically emergent and historically incipient concepts of “Man” and nation.

Renaissance anatomy related to the idea of divine creation through concepts of design and teleology, to mortality through the iconography of the vanitas tradition, and to salvation and resurrection through its analysis of the relationship of part to whole. The book argues that The Purple Island provided a verbally constituted form of ocular evidence for believing in the divine promise of a full recovery of the prelapsarian “Image of God” at the general resurrection. But like the anatomical demonstrations that took place during the Carnival, the poem dramatizes the equivocations that arise in the shadow of the Fall and the light of salvation, between teleological anatomical structure and corruptible, grotesque “flesh”.

A further avenue of inquiry has been the question of philosophical rationality and scepticism in Renaissance anatomy, including poetic anatomies. One focus of this is the imaginative rationality of figurality. As a Wood Institute Fellow at the Historical Library of the College of Physicians of Philadelphia, I undertook research into the etymology and inherent figurality of anatomical nomenclature, in relation to Robley Dunglison’s nineteenth-century Medical Lexicon or Dictionary of Medical Science.

Literary Anatomy and the Bodies of Souls

My next research project developed out of the observation that while philosophical and theological understanding of the soul and spirit provides the coherence, rationalisation, and justification for anatomy in Fletcher’s Purple Island, inversely in his prose religious writings the mortal and immortal parts of the human soul, and the inspiration of the Holy Spirit, are represented figuratively in terms of the anatomy and physiology of the generation of “vital” and “animal” (from anima = soul) “spirits” in the heart and brain. This observation led me to ask whether this corporeal figurality shapes understanding.

This research falls into two parts. Initially I am analysing the ways in which the poetic or prose literary anatomy of the Renaissance uses anatomy’s language, concepts, contexts, descriptive criteria, forms of presentation, methods, purposes, and conventional, literary associations and commonplaces. This stage of the project has been supported by a Leverhulme Research Fellowship and has resulted in a keynote public lecture at St Chad’s College, Durham University, on the idea of the anatomical “speaking picture” of poetry, and “display” and other literary associations of anatomy.

The second, albeit overlapping stage of this research examines the same use of Renaissance anatomy specifically in description of the soul or spirit. Studies of the early modern expression of mental, psychological, or spiritual phenomena using the language of the body have tended to explain it in terms of Galenist or Paracelsian medicine, and not in terms of anatomy because an influential view of the rise of anatomical science is that it involved the production of objectifying knowledge, which led, in the seventeenth century, to a mechanistic conception of human anatomy as regulated merely by matter and motion. Since mechanistic philosophy tended to preserve a distinction between body and soul, and between the languages used to describe each, such knowledge, it is argued, contributed to a diminution of the description of the soul using the language of the body. My initial findings have prompted me to aim to qualify this view and have been presented in a conference paper to the Society for Renaissance Studies, on the health and disease of the bodies of souls in Fletcher’s religious anatomies. Currently I am analysing Samuel Purchas’s Microcosmus (1619) – a predominantly pessimistic literary anatomy of “man” as “altogether vanitie” – in terms of the analogy between the body-soul relationship and colonial encounter in Virginia.

My professional service includes conducting peer reviews of the following:

Wood Institute Fellowship with the Francis C. Wood Institute for the History of Medicine, to enable research at the Historical Library of the College of Physicians of Philadelphia on ‘Robley Dunglison’s Dictionary of Medical Science: Standardisation of anatomical nomenclature and the modern elision of etymology’

Leverhulme Research Fellowship with The Leverhulme Trust, to enable research on ‘Bodies of Souls in Seventeenth-Century Literature’, specifically in relation to biographical and bibliographical questions of the provenance and conceptual character of the anatomy in The Purple Island (1633)

‘“Shall I the Hearts un-equall sides explain …? Or, shall I rip the Stomachs hollowness …?” The Anatomical Speaking Picture, Display and the Literary Associations of Anatomy in the Early Seventeenth Century’. I delivered this lecture and chaired the round-table discussion at the conference, The Body on Display, from Renaissance to Enlightenment, at St Chad’s College, Durham University, 6-7 July 2010.