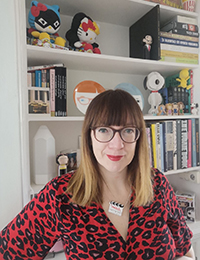 I am Programme Manager for the BA in Film and TV course. I lecture across all contextual and theoretical units and am also lecturing in Visual Studies as part of the BA in Illustration. I am Personal Tutor for Level 4 students across both programmes of study.

Prior to my role at UWTSD, I was the Subject Lead for Film Studies at WJEC/Eduqas Examining Body leading the design, implementation, delivery and assessment of reformed GCSE and A Level Film and Media Studies qualifications for England and Wales.

I have over 12 years' experience lecturing in Film Studies and designing training programmes for young adults. During my career in Film Education, I have continuously sought out to deliver enterprising programmes of study for learners. I have worked closely with the British Film Institute to support their Future Learning and Skills strategy to ensure the relevance and validity of post-16 qualifications including advising on diversity in film panels.

I have produced the annual WJEC Moving Image Awards at the BFI for five years securing guest speakers such as Edgar Wright, Peter Lord (CBE), Michael Sheen, and Sarah Gavron to come and inspire students.

I have previously been a programmer for Sheffield International Documentary Festival's diversity strand, viewing and recommending entries for inclusion in the programme. I have worked as a Film Critic for a variety of publications including Little White Lies Magazine and Media Magazine.

I have spoken as an advocate for gender equality at Film- and Media-themed events, hosting gender-themed panel events at festivals including Underwire Film Festival, Birds Eye View Film Festival, the London Comedy Film Festival and the British Film Institute Film and Media Conference.

I teach across a range of modules including:

My main research interests surround issues of representation and spectatorship across the realms of both illustration and film. The promotion and creation of positive female imagery has always been central to my practice as an artist and film lecturer and is something I have explored consistently within my research. I wish to illuminate the histories, lives and legacies of forgotten and marginalised women by using the mediums of illustration and film.