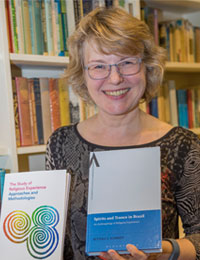 Further roles at UWTSD are:

In 2004 I moved from Germany to the UK and began teaching study of religions, first at Oxford University, then at Bangor University and now at the University of Wales Trinity Saint David.

In addition to research and teaching, I have taken on several external roles. I am currently President of the British Association for Study of Religions (BASR) and serve on various boards of editors for journals and book series.

I am a member of the Peer Review College of the Arts and Humanities Research Council and member of the Scientific Advisory Boards of the research centre Religion and Transformation in Contemporary Society at the University of Vienna.

I also serve currently on the sub-panel for Theology and Religious Studies of the Research Excellence Framework 2021.

My teaching focus is on theoretical and methodological approaches to the study of religions as well as various aspects of contemporary religions. On the undergraduate level I teach, for instance, the modules Anthropology of Religion (level 4), Living Ancestors and Talking Trees: Indigenous Religions Today (level 5/6), Exploring Religions in Latin America (level 5/6), Shamans, Visions, and Ghosts: Exploring Spiritual and Religious Experience (level 5/6) and others.

I have supervised in the past PhD students about New Age, Vodou, various aspects in cultural anthropology as well as Brazilian Diaspora churches in the UK, religious change and conversion, and religion and reconciliation. Currently, I supervise research students with research projects ranging from a study of sacred space in the US and different aspects of religious and spiritual experience. I also supervise a range of dissertations of students of the MRes Religious Experience.

One focus in my research activities is on the African diaspora, with empirical fieldwork in the Caribbean (my PhD thesis, published in 1995 in Germany, was about religion and identity in Puerto Rico), Latin America (my first post-doc research project was about religious festivals in Ecuador),  the U.S.A. (my habilitation research was conducted in New York City among migrants) and Brazil (on spirit possession and trance).

My last research project was about the interpretation of spirit possession and trance. In 2010 I conducted fieldwork in Brazil. In addition to participant observations of possession rituals, I interviewed people of various religious communities about their experience of being possessed. The outcome of the research is published in my new book “Spirits and Trance in Brazil: An Anthropology of Religious Experiences” (Bloomsbury 2016).

My current research project focusses on spirituality and wellbeing. I have conducted online surveys in Brazil and the UK in order to understand how people working in the medical sector and people identifying as religious or spiritual perceive wellbeing and the relationship between the two sectors. In 2018 I began with in depth interviews in Brazil.

My research about Afro-American religions has been disseminated through articles and public lectures, leading to enhanced public awareness of the positive impact of these religions for the devotees. From the beginning of my career, I have been committed to communicating my work beyond the small academic field of anthropologists.

I was, for instance, involved in the German society of ethno-medicine, an organisation of academic and practitioners in public health and organised as member (later vice-president) conferences, public meeting and special issues of the journal (e.g., about AIDS/HIV  in its wider cultural context).

Since moving to the UK in 2004 I spoke frequently at meeting organised by INFORM (Information Network Focus on Religious Movements) in London.  The significance of my contribution to the understanding of Afro-American religions is recognised nationally and internationally. In 2007 I was listed under the key figures of academics in Creole Studies.

The Faculty celebrated the launch of two new books published by Prof Bettina Schmidt.
Here is a link to the recording:

Selection of other publications:

Since 2008 app. 23 research degrees theses examined for universities in the UK, Germany, Austria and Australia.

A selection of recent invited lectures and conference papers

February 2018: 'The contentious field of the study of religious experience: The challenging influence of Rudolf Otto, Andrew Lang and other founding fathers', Open University.

September 2017: 'Anthropology of Religious Experience: a deictic approach to the study of mediumship', Cologne.

August 2013: ‘The Trouble with Spirit Possession in Brazil’. 17th World Congress of the International Union of Anthropological and Ethnological Sciences, Manchester.

September 2012: ‘Incorporation does not exist’ – the Brazilian rejection of the term ‘possession’ and why it exists nonetheless’. At the Conference ‘Spirit Possession: European contributions to comparative studies’, Pecs, Hungary.